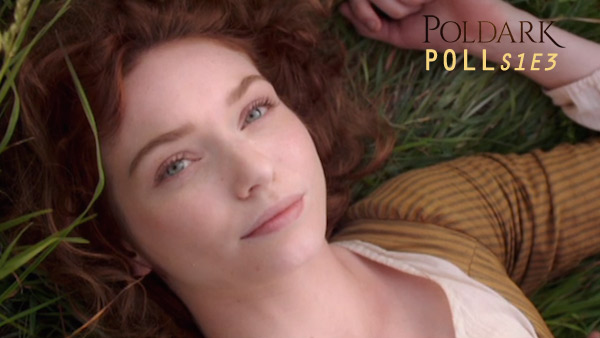 When Ross Poldark (Aidan Turner) returned to Cornwall following the war, he was stunned to find that his past love, Elizabeth (Heida Reed), had become engaged to his cousin Francis (Kyle Soller). Reeling from this revelation, as well as news that his father died and his mining company was in shambles, Ross found Demelza (Eleanor Tomlinson), a fair-skinned beauty that had endured the rigors of a challenging home life. While initially rough around the edges, Ross chose to bring in Demelza as his maid.

Unlike his other two servants, Jud (Philip Davis) and Prudie (Beatie Edney), Demelza appreciated Ross’ generosity and performed her tasks nobly. As she continued to gain Ross’ trust, Demelza clearly started to reveal herself as more than just an employee.

As their relationship evolved, it became obvious that Ross and Demelza were building intimate feelings for one another. There would be secret glances, couple-like banter and moments of great intensity.

After a troubling day in which Ross saw his friend Jim Carter (Alexander Arnold) get sentenced to two years in prison, he returned home just as Demelza had put on a fancy dress in which she found in one of Ross’ trunks. Upon discovering that Demelza had shed her beat up wardrobe for this piece of formal attire, Ross’ temper began to rise.

Ross: “You’re employed as a maid.”

Ross: “And you’ve been a good one. And for that, you’re allowed certain liberties, but dressing up in fancy clothes isn’t one of them.”

Demelza would assure Ross that she didn’t mean any harm, but that did little to sway him.

“Take it off now! Shouted an enraged Ross. “If you don’t take it off this minute, you can pack your things and go back to your father.”

This angry moment brought Demelza to tears, which led to Ross trying to calm her down. Soon enough, the two would lock eyes and realize that there’s more between them than an elegant dress. A passionate kiss would occur, followed later in the evening by an intimate encounter.

Day after awkwardness would motivate Demelza to leave Ross behind. He, however, doesn’t let this happen. Instead of just opting to extend an olive branch, he endeavours to promptly marry Demelza.

Even though it was easy to tell that Ross and Demelza had feelings for each other, for some time, do you think the two should be married?

VisionTV’s encore presentation of Season 1 of “Poldark” can be seen on Wednesday nights at 10pm ET/7pm PT, following Doc Martin.

Also, please be sure to enter our A Year of Poldark Contest for your chance to win a show calendar, as well as an autographed photo of Ross Poldark himself, Aidan Turner!

Did you participate in last week’s Poldark Poll? If not, you can do so right here!