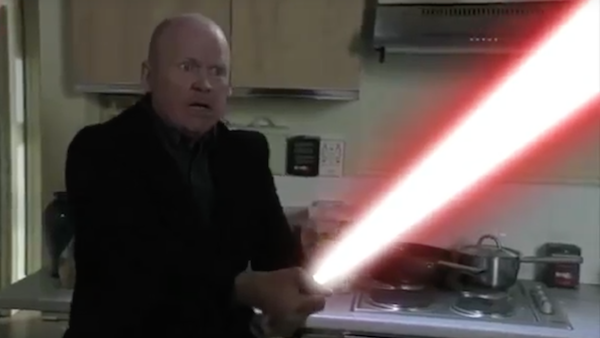 Considering how massive of a movie franchise “Star Wars” is, it shouldn’t be surprising that some of our favourite shows like to pay tribute to the George Lucas creation.

Following in Downton’s well-placed footsteps is “EastEnders,” who also recently had some fun with the long-running “Star Wars” craze.

In a 30-second clip that’s emerged online, the series’ Phil Mitchell (Steve McFadden) comes bursting into an apartment wielding a vibrant lightsaber in the direction of the slightly fearful Syed Masood (Marc Elliott) and Christian Clarke (John Partridge), the latter of which lets out a distinctive Chewbacca roar. It’s nice to get a glimpse of Elliott and Partridge again after their characters departed the series a few years back to live, hopefully, happily ever after together.

To make the video even more out of this world, the “EastEnders” opening has been edited to feature Darth Vader’s TIE fighter flying around, along with sounds familiar to any “Star Wars” fan. You can watch the action below!

“EastEnders” can be seen on VisionTV beginning at Midnight ET/9pm PT on Thursday and Friday nights.

Speaking of “Downton Abbey,” VisionTV is currently airing an encore presentation of the series’ fourth and fifth seasons on Wednesday nights at 10pm ET/7pm PT. On Wednesday, June 29, the sixth season of “Downton Abbey” kicks off on VisionTV, beginning at 9pm ET/6pm PT.