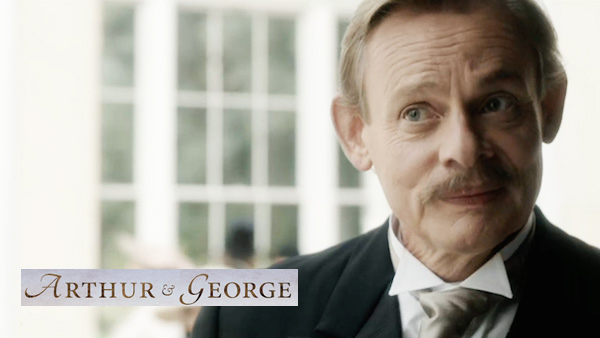 Click here to stream Episode 1 of “Arthur & George.” It’ll be available through May 26. Do note that there are numerous spoilers ahead.

In 1906, Sir Arthur Conan Doyle (Martin Clunes) is struggling to face the world following the passing of his wife, Louisa. Arthur’s riddled with guilt over thoughts that Louisa suspected him to be an adulterer and nothing, even penning his famous Sherlock Holmes stories, can help supersede his discontent.

One day, everything begins to change once Arthur’s secretary, Woodie, happens upon a letter from young Parsee solicitor, George Edalji, an individual who spent three years in jail after being convicted of animal maiming and the sending of threatening letters. George, who is now free and adamant that he did not commit those crimes, has turned to Arthur in hopes that the crime novelist can help clear his name.

After hearing George’s story in person, Arthur is convinced that the wrong man was locked away. Arthur soon tracks down the transcript of George’s trial, but is advised by the judge who presided over it to not reinvestigate the case. Sceptical, Arthur pushes forward and arrives at George’s family home in Great Wyrley. Here, more evidence is seen and Arthur becomes even more certain that the so-called ‘Wyrley Ripper’ is still on the loose.

While sitting down for a meal with the Edaljis, Arthur suspects that someone is listening in on them and, along with Woodie, opts to sneak outside and find out who is lingering by the window. Despite thinking they had the culprit cornered, an escape through the dark is achieved. Arthur is now left to wonder just how many more twists this case will present him with.

In the photo gallery below, we have shared some of the most memorable sights from episode one of the stunning, three-part miniseries, “Arthur & George.” Be sure to tune in on Wednesday, May 3 at 9pm ET/6pm PT for part two.